I have a confession to make. Now being single is not that easy, specially when it has been an eternity. You want love, just not the love which is creeply crawling through the Instagram doors.  You think it’s about time to go out there, give your zenith emotions, bask in the glory, play in the soil, get soaked , rejoice, tweet, chirp , clutter (still talking about love). But come on now, does it even matter that you are ready. I am not even looking for a right guy, and where is this corner? So much for “the right guy is just around the corner”.

And then you see your best friend sailing and also trying to rock the same boat. It becomes endurable. Having to see your favourite person go through the same set of  thought processes makes you believe you weren’t just being hormonal.

Ah here is the fun. We in our solo kingdom of Singledom, (not sailing towards doom, no no). Looking at other people’s first relationships and wishing to have a first one again. That’s like wishing for three more wishes from the three wishes given by some (very important) Genie.

When you know someone for ten years, you tend to get them better than yourself! Analysing what went wrong or what was the only right, cracking up at each others failed relationships, brilliantly. Some might call it dark humor. Mocking the lost love ; but the only thing dark about it, is the dark movie theatre where only movies should be watched. Yes. Thankyou.

Women, or men around the world have such few wants and needs (joking, obviously). Few friends to hang around who pay for your beer always, a lover who has time for you, makes time for you, a partner (would be great if he is also the lover), couple or bunch (based on your economic status or the country you live in) of adorable kids, a farmhouse , a house in the hills, a shack by the beach, a secure pensions’ account. Such simple wishes.

What do me and my friend need at this moment? Yes, you got it! A beer and a lover. He doesn’t even have to be ‘The Lover’. Just good enough to love you back. We are smart women and having understood that there are no perfect men or right guy or some prince charming. He can be just as quirky as you and love you the most.

If he is ready to sail with you in your crammed boat of musings and willingly shares the beer with your maddening friend who chooses dogs over kids. Don’t just settle for him. Glide with him!

This post is a part of Write Over the Weekend, an initiative for Indian Bloggers by BlogAdda.

From the archives, over the years.

I hope I reach a day when I can write about myself without deliberating. View all posts by Shambhavi Sharma

I am no google though!

Happy birthday to my dear friend @bhuvan19193 to whom I did call this year. ❤️ 🕺 #eligiblebachelor #verycanada
was finding a picture for @docnihal. nvm nothing better than this. Happy Birthday lil guy. 😂❤️
expectations are high this year. hahaha like every year. hahaha.
sums up my decade! ❤️
feeling cute, might unfollow you later ✨
alter ego Anjali reminding you all to stay angry and stay safe. filter is called enough.
tb to when mallu was really scared, then really happy 😂😂 Also the best hosts @_shalinimundra_ @i_aakkii Here Here ✨ 💖 #2017
If we were of the same age she would not have been friends with me. 😂 Thank you for being my super cool and hot mommy. Happy Birthday! I love you! ✨✨✨✨❤️❤️❤️❤️
from mine to yours ❤️✨ #sharmafam

what you know about me is what I have told you. most of our relationships, except few precious ones which see you become YOU - are like that. Read the Murakami quote when this thought came to me - "most everything you think you know about me is nothing more than the memories". . Took this shot on my early Mangalore - Delhi flight. Pre sunrise is rare for me. You get to see beautiful things when you do the rare. ✨ #waketowoke #getsomelove2020
Introducing perhaps this one person who doesn't think I am funny - my v v important and only brother. That's his sole vice so it's alright. He is exactly the wise rock (like @therock) which everyone deserves to have in their lives. I have had the best revelations, rundowns of the past (read - bad) decade with him in the last few days. Some of them if not all will make it into our memoirs. My 2020 is about knowing thy people I think I know. It's not his birthday. #waketowoke #getsomelove2020 🌱
SWIPE 🕺 new-year-new-me or what
This year I saw some hellos, many goodbyes. You are a - see you soon. The dark horse friendship. ❤️✨
apathy and spite walked into a bar ignorance and arrogance grooved to grief No joke here. That's it. That's what happened. #waketowoke
such playas we are, taking on different roles. transient roles woven for the sum cosplay of human relations. "cast off the transient, reveal the true" - Dr Daisaku Ikeda #waketowoke #superhappydays

Blogging from A to Z April Challenge 2016

Thank you for giving your time! 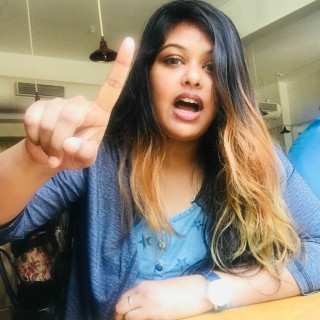 I hope I reach a day when I can write about myself without deliberating.